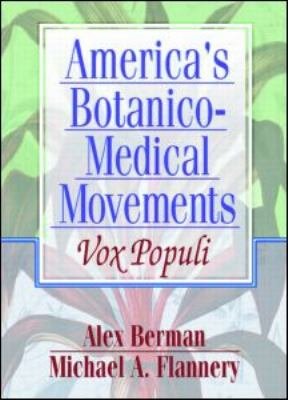 Discover a fascinating lost episode of American pharmacological history! A CHOICE Outstanding Academic Book! The first comprehensive study of the American botanical movement, this fascinating volume recounts the rise and fall of nineteenth-century herbal medicine, the emergence of a second wave of interest arising from the counter-culture of the 1960s, and the recent herbal renaissance in the United States. In the 1840s the American medical establishment was under attack. Its opponents in the botanico-medical movement claimed that herbs and other natural cures were more effective and considerably safer than conventional medicine. They were right. Conventional medicine at the time consisted of ”heroic” doses of mercury and antimony, supplemented by Spanish fly and croton oil, with copious bloodletting as a treatment recommended for everything from mania to miscarriage. By contrast, many of the herbal cures espoused by the new wave of medicine were helpful or at least not actively poisonous. Unfortunately, the botanico-medical movement harbored its share of quacks as well. The history recorded in America's Botanico--Medical Movements includes useless or dangerous treatments as well as petty politics of the worst kind: schisms, public denunciations, physical brawls (with weapons up to and including small cannons), and vicious invective worthy of Hunter Thompson. The favored treatments and pharmacopias of Thomsonians, Neo-Thomsonians, physio-medicalists, and eclectic practitioners are all discussed in detail. In addition to its fascinating narrative, America's Botanico--Medical Movements offers hard-to-find source documents, including: a catalog of nineteenth-century medicinal plants the constitutions of several medical societies explaining their doctrines a libelous editorial attacking members of one of the schismatic groups patented formulas for fever medicines, emetics, enema preparations, and many other cures advertisements listing vegetable medicines for sale America's Botanico-Medical Movements provides a scholarly yet entertaining view of the rise and fall of a typically American medical movement. Pharmacists, historians, physicians, and herbalists will find instructive parallels between the nineteenth-century conflicts and the present-day battles between alternative medicine and the medical establishment. This fascinating book represents nearly 50 years of scholarship on the subject and offers the only comprehensive look at medical botany in this country.

Authors: John S. Haller
Categories: Health & Fitness
Samuel Thomson, born in New Hampshire in 1769 to an illiterate farming family, had no formal education, but he learned the elements of botanical medicine from a

The Profit of the Earth

A Bachelor's Life in Antebellum Mississippi

Authors: Elijah Millington Walker
Categories: History
"A Bachelor's Life in Antebellum Mississippi brings to the public one of the few diaries of a very intelligent yet "ordinary" man, a non-elite member of a socie

Authors: Lynn Dumenil
Categories: History
The Oxford Encyclopedia of American Social History is the first reference work to eschew a narrow focus on past presidents, intellectuals, military heroes, and

An Annotated Catalogue of the Edward C. Atwater Collection of American Popular Medicine and Health Reform

Authors: John R. Shook
Categories: Philosophy
The Dictionary of Early American Philosophers, which contains over 400 entries by nearly 300 authors, provides an account of philosophical thought in the United