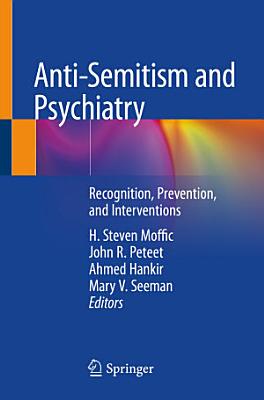 Following World War II and the exposure of the concentration camps, psychiatry turned its attention to a vast range of cultural concerns with results that seemed to indicate a decline of stigma over time. However, it is now clear that whatever drives prejudices, especially in the case of anti-Semitism, was just dormant and perhaps not fully understood. Hate crimes and anti-Semitism broad recently re-emerged in Europe, and the United States followed shortly thereafter. The US Federal Bureau of investigation reports that New York City, which is still considered the most Jewish-friendly region in the US, experienced a 22% spike in anti-Semitic hate crimes in 2018 alone, with more extremes in other regions of the country. Neo-Nazi groups have grown stronger in the United States and abroad, often resulting in organized acts of violence. The recent Tree of Life synagogue shooting in Pittsburgh, PA demonstrated that these acts are not limited to one-on-one interactions, but sometimes as prolific, large-scale act. The medical community is not immune from biases either. The Cleveland Clinic recently fired a young doctor after she publicly declared her wishes to inject Jewish patients with lethal substances, which is only one of many hateful comments she made on social media over the course of several years. Psychiatrists in particular grapple with this as they try to serve patients of both Jewish and non-Jewish descent who struggle to process these acts of hate. Despite all of this, there is no training and no resource to guide medical professionals through these challenges. The editors of the recent Springer book, Islamophobia and Psychiatry, recognize this gap in the literature and seek to develop another high-quality text to meet this need. Written by expert clinicians in global regions where these incidents are most prevalent, the book seeks to be neither political nor opinion-based; instead, the text takes an innovative cross-cultural psychiatric interaction, similar to what was done with Springer’s new Islamophobia book. Coverage will range from foci on the social psychiatric aspects of anti-Semitism to how it may in turn infuse clinical encounters between patients and clinicians. Written by experts in this area, the insight and expertise of psychiatrists from a variety of cultural and religious backgrounds will focus on what psychiatrists need to know to combat the negative mental health impact that increasingly rise out of this particular phenomenon. Such a multi-cultural psychiatric approach has never been taken before for this topic. This discourse is the foundation for the primary goal of this book: to develop the tools needed to improve clinical outcomes for patients. Hence, this book aims to present an updated, comprehensive bio-psychosocial perspective on anti-Semitism at the interface of clinical psychiatry.

Authors: H. Steven Moffic
Categories: Medical
Following World War II and the exposure of the concentration camps, psychiatry turned its attention to a vast range of cultural concerns with results that seeme

Authors: Theodore Isaac Rubin
Categories: History
A groundbreaking work on the psychodynamics of bigotry and anti-Semitism.As a child, Ted Rubin could not understand why some people hated him and his family onl

Authors: Daniel Burston
Categories: Psychology
Carl Jung angrily rejected the charge that he was an anti-Semite, yet controversies concerning his attitudes towards Jews, Zionism and the Nazi movement continu

Clinical studies in psychiatry. Schizophrenia as a human process. The fusion of psychiatry and social science

Authors: John R. Peteet
Categories: Medical
This book aims to help readers appreciate the many-faceted relationship between Christianity, one of the world’s major faith traditions, and the practice of p

The Israel Annals of Psychiatry and Related Disciplines

Living and Dying in Hungary

Authors: Ervin Varga
Categories: Biography & Autobiography
Th is book was written about his family, his life, and his experiences before World War II was over. It was written more like a clinical record rather than a me

Who Gave Israel to the Robbers?