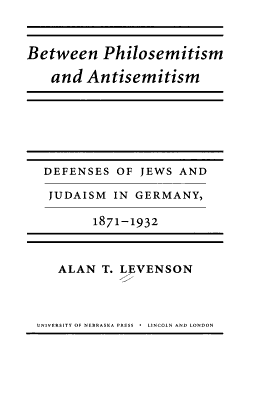 Philosemitism, as Alan T. Levenson explains it, is "any pro-Jewish or pro-Judaic utterance or act." The German term for this phenomenon appeared in the language at roughly the same time as its more famous counterpart, antisemitism, and its emergence signifies an important, often neglected aspect of German-Jewish encounters. Between Philosemitism and Antisemitism offers the first assessment of the non-Jewish defense of Jews, Judaism, and Jewishness from the foundation of the German Reich in 1871 until the ascent of the Nazis in 1932, when befriending Jews became a crime.Levenson takes an interdisciplinary look at fiction, private correspondence, and published works defending Jews and Judaism in early-twentieth-century Germany. He reappraises the missionary Protestant defense of Judaism and advocacy of Jewry by members of the German peace movement. Literary analysis of middle-brow novels with positive Jewish characters and exploration of the reception of Herzlian Zionism further illuminate this often overlooked aspect of German-Jewish history. Between Philosemitism and Antisemitism shows the dynamic process by which a generally despised minority attracts defenders and supporters. It demonstrates that there was sympathy for Jews and Judaism in Imperial and Weimar Germany, although its effectiveness was bounded by the values of a bygone era and scattered across the political and social spectrum.Alan T. Levenson is a professor of Jewish history at Laura and Alvin Siegal College of Judaic Studies.

Between Philosemitism and Antisemitism

Authors: Alan T. Levenson
Categories: History
Philosemitism, as Alan T. Levenson explains it, is "any pro-Jewish or pro-Judaic utterance or act." The German term for this phenomenon appeared in the language

Antisemitism and Philosemitism in the Twentieth and Twenty-first Centuries

Authors: Phyllis Lassner
Categories: History
This book of essays provides a significant reappraisal if discussions of antisemitism and philosemitism. The contributors demonstrate that analysis of philosemi

Anti-semitism and Philosemitism After 1945

Authors: Jonathan Karp
Categories: History
A broad and ambitious overview of the significance of philosemitism in European and world history, from antiquity to the present.

The People of the Book

Authors: Gertrude Himmelfarb
Categories: History
The history of Judaism has for too long been dominated by the theme of antisemitism, reducing Judaism to the recurrent saga of persecution and the struggle for

Key Concepts in the Study of Antisemitism

Authors: Sol Goldberg
Categories: History
This volume is designed to assist university faculty and students studying and teaching about antisemitism, racism, and other forms of prejudice. In contrast wi

The Nun in the Synagogue

Authors: Emma O’Donnell Polyakov
Categories: Religion
The Nun in the Synagogue documents the religious and cultural phenomenon of Judeocentric Catholicism that arose in the wake of the Holocaust, fueled by survivor

The Jew as Legitimation

Authors: David J. Wertheim
Categories: Social Science
This book traces the historical phenomenon of “the Jew as Legitimation.” Contributors discuss how Jews have been used, through time, to validate non-Jewish

The Whitewashing of the Yellow Badge

Authors: Frank Stern
Categories: History
The central themes of The Whitewashing of the Yellow Badge are the attitudes, behavior and actions of gentile towards Jew in postwar Germany. The analysis focus

The Making of the Modern Jewish Bible

Authors: Alan T. Levenson
Categories: Religion
Tracing its history from Moses Mendelssohn to today, Alan Levenson explores the factors that shaped what is the modern Jewish Bible and its centrality in Jewish