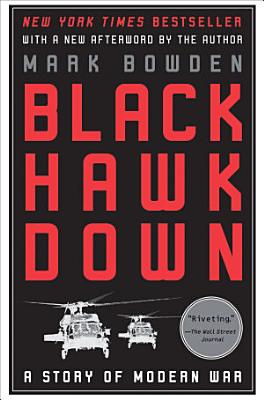 Already a classic of war reporting and now reissued as a Grove Press paperback, Black Hawk Down is Mark Bowden’s brilliant account of the longest sustained firefight involving American troops since the Vietnam War. On October 3, 1993, about a hundred elite U.S. soldiers were dropped by helicopter into the teeming market in the heart of Mogadishu, Somalia. Their mission was to abduct two top lieutenants of a Somali warlord and return to base. It was supposed to take an hour. Instead, they found themselves pinned down through a long and terrible night fighting against thousands of heavily armed Somalis. The following morning, eighteen Americans were dead and more than seventy had been badly wounded. Drawing on interviews from both sides, army records, audiotapes, and videos (some of the material is still classified), Bowden’s minute-by-minute narrative is one of the most exciting accounts of modern combat ever written—a riveting story that captures the heroism, courage, and brutality of battle.

A Study Guide for Mark Bowden's "Black Hawk Down: A Story of Modern War"

Authors: Levi Buchanan
Categories: Games & Activities
• Maps and strategies for the massive multiplayer battles • Multiplayer tactics from the people that made the game • Expert combat tips for the single-pla

History in the Media

Authors: Robert Niemi
Categories: Performing Arts
A resource on the depiction of historical events in film, on television, and on the Internet combines the latest scholarship with reviews of specific works.

Authors: Cynthia Weber
Categories: Political Science
Ten films released between 9/11 and Gulf War II reflect raging debates about US foreign policy and what it means to be an American. Tracing the portrayal of Ame

The Soft Power of War

Authors: Lilie Chouliaraki
Categories: Language Arts & Disciplines
This book, which was originally published as a Special Issue of Journal of Language & Politics 4:1 (2005), takes the war in Iraq as an exemplary case through wh

In the Wake of Terror

Authors: Opiyo Oloya
Categories: History
“Black Hawks Rising” tells the story of the formation and deployment of the African Union Mission to Somalia (AMISOM) in March 2007. Initially confined to p