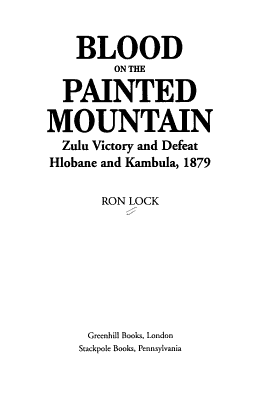 The Zulu stronghold of Hlobane ('the painted Mountain') dominated a vast area of disputed land in northern Natal. It was the scene of a terrible reverse for the British, but at Kambula the next day they inflicted an even more catastrophic defeat upon the Zulus. The Zulus never fully recovered from this repulse, and it marked the turning point in the war. The slaughter at Hlobane was second only to that at Isandlwana two months earlier, which ravaged morale in the British Army. This was in part responsible for the highly questionable conduct of some of the officers when faced with the enemy at Hlobane, leading to the British rout at Devil's Pass. Without defeat at Hlobane, however, victory at Kambula might not have been possible: the warriors of the leading Zulu regiments, over-confident after their resounding success, were easily provoked into an ill-judged attack on the enemy camp at Kambula, and exhausted themselves before the British survivors of the previous day's battle set out in pursuit, leaving 1,000 Zulu dead on the Zunguin Plain. Ron Lock examines Hlobane as the only engagement of the war that the British fought entirely as a mounted force (although supported by Swazi foot auxiliaries). The Colonial horsemen of Colonel Evelyn Wood's No. 4 Column at Hlobane, local volunteers almost to a man, fought daringly but received little credit for their sacrifices on behalf of the British Empire. In Britain the shattering defeat was quickly passed over, the deaths of the local volunteers going mostly unmourned and the news immediately superseded by victory at Kambula. Using a wealth of new evidence drawn from a wide variety of sources, Ron Lock ensures that praise and blame are now fairly apportioned, in this gripping account of a vital part of the Anglo-Zulu War.

Blood on the Painted Mountain

Authors: Ron Lock
Categories: History
The Zulu stronghold of Hlobane ('the painted Mountain') dominated a vast area of disputed land in northern Natal. It was the scene of a terrible reverse for the

Authors: Chris Schoeman
Categories: History
The full, fascinating true story of the Anglo-Zulu conflict - responsible for some of the bloodiest battles in British history, including Rorke's Drift. Drawing

Authors: Stephen Manning
Categories: Biography & Autobiography
Given the increasing interest in the Victorian era an authoritative biography of Field Marshal Sir Evelyn Wood VC is long overdue. By any standards his career w

Authors: Ian F. W. Beckett
Categories: History
The senior British generals of the Victorian era - men like Wolseley, Roberts, Gordon and Kitchener - were heroes of their time. As soldiers, administrators and

Authors: Ron Lock
Categories: History
“A densely detailed account of the 1879 Zulu defeat of the British . . . portrays a complex and interesting segment of British/African history.”—Library J

For the Queen and Country

Authors: James W. Bancroft
Categories: History
The Anglo-Zulu War lasted only six months in 1879, but in that relatively short time twenty-three men were awarded the Victoria Cross for gallantry under most t

Authors: Russell Davies
Categories: History
The first of two volumes on the social history of Wales in the period 1870–1948, People, Places and Passions concentrates on the social events and changes whi