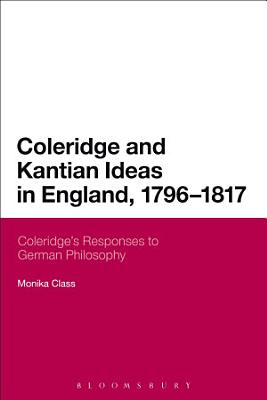 Author of Biographia Literaria (1817) and The Friend (1809-10, 1812 and 1818), Samuel Taylor Coleridge was the central figure in the British transmission of German idealism in the 19th century. The advent of Immanuel Kant in Coleridge's thought is traditionally seen as the start of the poet's turn towards an internalized Romanticism. Demonstrating that Coleridge's discovery of Kant came at an earlier point than has been previously recognized, this book examines the historical roots of Coleridge's life-long preoccupation with Kant over a period of 20 years from the first extant Kant entry until the publication of his autobiography. Drawing on previously unpublished contemporary reviews of Kant and seeking socio-political meaning outside the literary canon in the English radical circles of the 1790s, Monika Class here establishes conceptual affinities between Coleridge's writings and that of Kant's earliest English mediators and in doing so revises Coleridge's allegedly non-political and solitary response to Kant.

Authors: Monika Class
Categories: Literary Criticism
Author of Biographia Literaria (1817) and The Friend (1809-10, 1812 and 1818), Samuel Taylor Coleridge was the central figure in the British transmission of Ger

Authors: John Bugg
Categories: Literary Criticism
This is the first book to bring perspectives from the interdisciplinary field of Peace Studies to bear on the writing of the Romantic period. Particularly signi

Authors: Madeleine Callaghan
Categories: Literary Criticism
Eternity in British Romantic Poetry explores the representation of the relationship between eternity and the mortal world in the poetry of the period. It offers

Authors: Philip Aherne
Categories: Literary Criticism
This book examines the development of Samuel Taylor Coleridge’s intellectual legacy in Britain and America from 1834 to 1934 by focusing on his late role as t

Authors: Christopher Stokes
Categories: Literary Criticism
Whilst religion and the secular have been continually debated contexts for literature of the Romantic era, the dominant scholarly focus has been on doctrines an

Models of the History of Philosophy

Authors: Adam Roberts
Categories: Literary Criticism
This new edition of the Biographia supersedes all previous editions. Crucially, it takes into consideration 3 decades of research and scholarship on Coleridge a