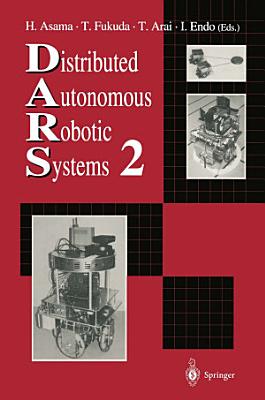 Great interest is now focused on distributed autonomous robotic systems (DARS) as a new strategy for the realization of flexible, robust, and intelligent robots. Inspired by autonomous, decentralized, and self-organizing biological systems, the field of DARS encompasses broad interdisciplinary technologies related not only to robotics and computer engineering but also to biology and psychology. The rapidly growing interest in this new area of research was manifest in the first volume of Distributed Autonomous Robotic Systems, published in 1994. This second volume in the series presents the most recent work by eminent researchers and includes such topics as multirobot control, distributed robotic systems design, self-organizing systems, and sensing and navigation for cooperative robots. Distributed Autonomous Robotic Systems 2 is a valuable source for those whose work involves robotics and will be of great interest to those in the fields of artificial intelligence, self-organizing systems, artificial life, and computer science.