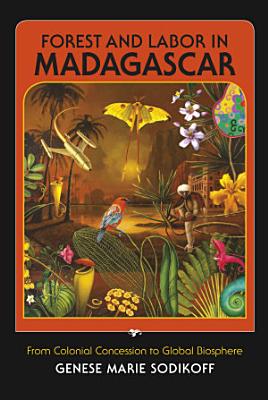 A study of the demands of economic development and ecological conservation on the African island country. Protecting the unique plants and animals that live on Madagascar while fueling economic growth has been a priority for the Malagasy state, international donors, and conservation NGOs since the late 1980s. Forest and Labor in Madagascar shows how poor rural workers who must make a living from the forest balance their needs with the desire of the state to earn foreign revenue from ecotourism and forest-based enterprises. Genese Marie Sodikoff examines how the appreciation and protection of Madagascar’s biodiversity depend on manual labor. She exposes the moral dilemmas workers face as both conservation representatives and peasant farmers by pointing to the hidden costs of ecological conservation. “Sodikoff takes us deep into the underbelly of conservation in one of the world’s biodiversity “hot-spots.” It is a world of timber barons, logging gangs, corrupt state functionaries, international conservation experts, worker-peasants, and poachers. She paints eastern Madagascar as a frontier of dispossession, exploitation, and violence. The plundering of the Mananara protected area is seen, in a brilliantly original way, from the subaltern vantage point of forest workers and conservation labor. Forest and Labor places present day conservation on the larger canvas of a century of forest-based social relations of labor that have entered into the making of what Sodikoff calls neoliberal conservation. It is a magnificently rich historical and ethnographic accounting of what passes as the making of global biosphere reserves. A tour de force.” —Michael Watts, UC Berkeley “An important and lively contribution to the study of “green neoliberalism.” An obvious choice for undergraduate teaching on ecology, rights, international political economy, development, and a host of other topics.” —David Graeber, University of London “Brings a whole new angle and nuance to the crucial debates over conservation and development. Applicable not just to lush, humid eastern Madagascar, but all around the globe.” —Christian Kull, Monash University “Those interested in conservation, tropical rainforest ecology, international political economy, and sustainable development will find Forest and Labor in Madagascar an insightful case study.” —Choice

Forest and Labor in Madagascar

Authors: Genese Marie Sodikoff
Categories: Science
A study of the demands of economic development and ecological conservation on the African island country. Protecting the unique plants and animals that live on

Authors: Chris Gibson
Categories: Music
"Guitars inspire cult-like devotion: an afficionado can tell you precisely when and where their favorite instruments were made. And she will likely also tell yo

Conservation and Environmental Management in Madagascar

Authors: Ivan R. Scales
Categories: Nature
Madagascar is one of the most biologically diverse places on the planet, the result of 160 million years of isolation from the African mainland. More than 80% o

Authors: Eric T. Jennings
Categories: History
This book is a vivid history of Madagascar from the pre-colonial era to decolonization, examining a set of French colonial projects and perceptions that revolve

Beyond the Lens of Conservation

Authors: Eva Keller
Categories: Social Science
The global agenda of Nature conservation has led to the creation of the Masoala National Park in Madagascar and to an exhibit in its support at a Swiss zoo, the

Authors: Anu Lounela
Categories: Social Science
People all over the globe are experiencing unprecedented and often hazardous situations as environments change at speeds never before experienced. This edited c

The Political Ecology of Drylands