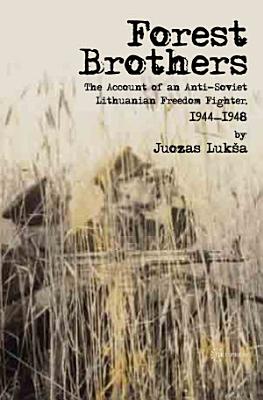 An autobiographical account of the armed resistance against the Soviet Union, which took place between 1944–1956. Published in English for the first time in unabridged form, Lukša's memoir remains one of the few reliable eye-witness accounts of the "Invisible Front", as dubbed by Soviet security forces. At its zenith 28,000 guerilla fighters participated in battles and skirmishes throughout Lithuania, Lukša (partisan codename Daumantas) being one of the leaders. Forest Brothers also documents the role of women in the resistance, giving equal credit to these often silent partners. In 1948 Lukša and two comrades broke through the Iron Curtain on the Polish border. He sought training from the French intelligence and from the CIA. Lukša was flown back into the Soviet Union under the radar on the night of October 4, 1950. He managed to survive and operate eleven months until his near capture and death on the night of September 5, 1951. His account, written during 1948–1950, while he was living in hiding in Paris, describes in vivid scenes and dialogue the daily struggles of the resistance.

Authors: Juozas Lukša
Categories: Biography & Autobiography
An autobiographical account of the armed resistance against the Soviet Union, which took place between 1944–1956. Published in English for the first time in u

Forest Brothers, 1945: The Culmination Of The Lithuanian Partisan Movement

War in the Woods

Authors: M. Laar
Categories: History
With the Soviet reoccupation after World War II, Estonians faced a choice of submitting to Communist puppets or trying to survive in the traditional refuge of t

Authors: Alexandra Ashbourne
Categories: History
In 1990, the tiny Soviet Republic of Lithuania declared independence and began restoring the mechanisms of independent government and democracy that had been su

The Testimony of Lives

Authors: Vieda Skultans
Categories: Social Science
Vieda Skultans left Latvia as a refugee at the age of six months. In 1990, she returned for the first time. This text is both a personal account of a homecoming

The Estonians; The long road to independence

The Power of Freedom - Central and Eastern Europe after 1945