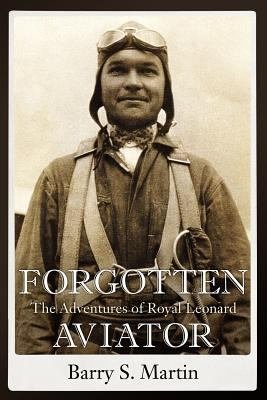 OUT OR WAR-TORN SKIES, A LEGENDARY PILOT IS BORN Royal Leonard (1905-1962) flew in and out of aviation history - just on the edge of fame. His exploits mirror important developments in the Golden Age of American Aviation (1925-1941) and the Sino-Japanese War (1937-1945). "If Royal's story were told in a novel," says long-time China pilot and author Felix Smith, "nobody would believe it all could have happened to one man." Royal learned his craft at the West Point of the Air in San Antonio, Texas. As a Western Air Express night mail pilot, he pioneered blind flying along the treacherous Rocky Mountains. As a TWA pilot, he introduced celestial navigation. An early Airline Pilots Association (ALPA) officer, he fought for mail plane safety at the cost of his job. He flew the Lockheed Orion in which Wiley Post and Will Rogers later crashed and attributed their fatal accident to a surprising cause. During the 1930s, a handful of elite pilots were racers. Jackie Cochran selected Royal as a copilot for the MacRobertson Race of the Century between England and Australia. Royal also competed in the Bendix Death Race in a Gee Bee Widow Maker. Before World War II, Royal worked for the Chinese warlord known as the Young Marshal who kidnapped Nationalist dictator Chiang Kai-shek and changed the course of Chinese history. Royal provided Communist political commissar Chou En-lai his first plane ride and later served as Chiang Kai-shek's personal pilot. During the war, Royal's roles were unique. Claire Chennault chose him to command the Flying Tigers Bomber Group. Royal briefed Colonel Jimmy Doolittle on Chinese landing fields for the Tokyo Raid. Royal, Chennault and Madame Chiang Kai-shek planned their own Tokyo bombing raid. Royal survived flying the Skyway to Hell over the Hump for China National Aviation Corporation. No wonder after a perilous flight war correspondent Martha Gellhorn described Royal as her "hero." Author's Biography The author has spent twenty years uncovering a rich trove of private documentary sources about the Forgotten Aviator. Martin is a Phi Beta Kappa graduate of the College of William and Mary and has an M.A. in history from the University of Washington and a J.D. from the University of California - Berkeley. He is a retired Administrative Law Judge and resides in Sacramento, California with his wife, Carolyn.

Authors: Barry S. Martin
Categories: Biography & Autobiography
OUT OR WAR-TORN SKIES, A LEGENDARY PILOT IS BORN Royal Leonard (1905-1962) flew in and out of aviation history - just on the edge of fame. His exploits mirror i

Authors: Jeff Maynard
Categories: Biography & Autobiography
By the 1930s, no one had yet crossed Antarctica, and its vast interior remained a mystery frozen in time. Hoping to write his name in the history books, wealthy

Authors: Alan Naldrett
Categories: Business & Economics
"Among more than two hundred auto companies that tried their luck in the Motor City, just three remain: Ford, General Motors and Chrysler. But many of those los

The Call of the Thunder Dragon

Compassion and Healing in Medicine and Society

Authors: Gregory Fricchione
Categories: Medical
Reconciling the scientific principles of medicine with the love essential for meaningful care is not an easy task, but it is one that Gregory L. Fricchione perf

Authors: Corey Mead
Categories: Biography & Autobiography
Corey Mead's The Lost Pilots is the saga of two star crossed pilots who soar to the greatest heights of fame, tailspin into scandal and crime, and go the ultima

Authors: Edgar L. Chapman
Categories: Reference
Dr. Chapman provides the first comprehensive examination of Farmer's major themes and fiction, from his earliest writings to his bestseller, The Gods of Riverwo

The Hunt for Jimmie Browne

Authors: Robert L. Willett
Categories: History
On Tuesday, November 17, 1942, aircraft CNAC No. 60 climbed slowly toward the Himalayas, growing smaller and smaller until it finally faded from sight, never to

Authors: Jon Malay
Categories: Fiction
Seraphim Sky is a fast-moving mystical adventure of sea, space, and the human spirit. In 1985, before the Space Shuttles Challenger and Columbia were tragically