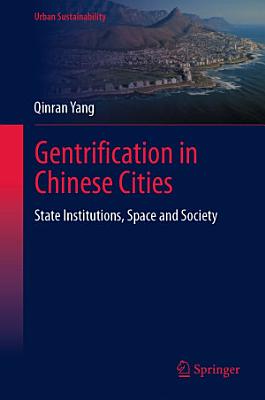 This book provides an institutional interpretation of state-facilitated gentrification in Chengdu, an emerging central city of China. It generalizes the three aspects of institutional changes in the cultural, economic and social spheres that have thus far directed the operation of gentrification in the transitional economy: the creative destruction of consumption spaces, the spatial production of excess, and the unequal redistribution of spatial resources to low-income residents. The interactions of state and society, are examined in navigating the institutional changes and forming the Chinese distinctions of gentrification. The author argues that these three aspects of institutional changes characterize gentrification in Chengdu as a transformative force of development led by the state and capitalists and championed by middle-class consumers. This gentrification mode periodically catalyzes new spaces and collective cultures, which then necessitate the stimulation of new consumption behaviors and the formation of new consumer classes, at the expense of the spatial demands for the even larger number of low-income residents. However, in the context of China's unique state–society relations, some low-income groups may also ride the wave of social transformation. The author suggests that this type of gentrification integrates into not the essence of uneven geographical development in a capitalist society, but China’s unique model of urbanization and development, which is often state-driven, innovative and even involuted so as to sustain continuous growth. Though the research is focused on urban China, this book also contributes to methodological issues on gentrification research on a global scale. It is skeptical both of the structural explanation and of the revelation of unsorted differences; instead, it aims to generate midrange regularities of gentrification in Chinese cities. Institutional change is treated as an intermediary that, on the one hand, responds to the global trends and, on the other hand, adapts to local preconditions. Mixed methods, including statistical and spatial analysis, institutional analysis, and an extensive ethnographic study, are used to investigate gentrification from a structural perspective, a historical perspective, and as a grounded process within the locality.

Authors: Qinran Yang
Categories: Science
This book provides an institutional interpretation of state-facilitated gentrification in Chengdu, an emerging central city of China. It generalizes the three a

Authors: Yiming Wang
Categories: Architecture
Shopping malls in China create a new pseudo-public urban space which is under the control of private or quasi-public power structure. As they are open for publi

Authors: Loretta Lees
Categories:
It is now over 50 years since the term ‘gentrification’ was first coined by the British urbanist Ruth Glass in 1964, in which time gentrification studies ha

Authors: Laurence J.C. Ma
Categories: History
A sea of change has occurred in China since the 1978 economic reforms. Bringing together the work of leading scholars specializing in urban China, this book exa

Tourism and Gentrification in Contemporary Metropolises

Authors: Maria Gravari-Barbas
Categories: Business & Economics
Tourism gentrification is a critical shaping force of socio-economic and contemporary urban landscapes. This book aims to be the first substantive text on this

Handbook on Urban Development in China

Authors: Ray Yep
Categories:
The trajectory and logic of urban development in post-Mao China have been shaped and defined by the contention between domestic and global capital, central and