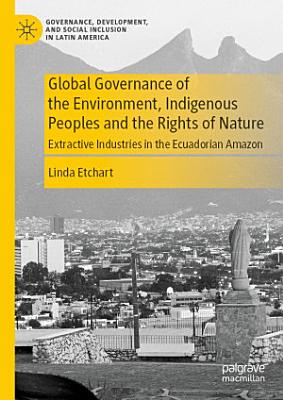 This book explores the obstacles facing indigenous communities, non-governmental organizations, governments, and international institutions in their attempts to protect the cultures of indigenous peoples and the world’s remaining rainforests. Indigenous peoples are essential as guardians of the world’s wild places for the maintenance of ecosystems and the prevention of climate change. The Amazonian/Andean indigenous philosophies of sumac kawsay/suma qamaña (buen vivir) were the inspiration for the incorporation of the Rights of Nature into the Ecuadorian and Bolivian constitutions of 2008 and 2009. Yet despite the creation of the United Nations Permanent Forum on Indigenous Issues (2000), and the adoption of the United Nations Declaration on the Rights of Indigenous Peoples (2007), indigenous peoples have been marginalized from intergovernmental environmental negotiations. Indigenous environment protectors’ lives are in danger while the Amazon rainforests continue to burn. By the third decade of the 21st century, the dawn of “woke” capitalism was accompanied by the expansion of ethical investment, with BlackRock leading the field in the “greening” of investment management, while Big Oil sought a career change in sustainable energy production. The final chapters explain the confluence of forces that has resulted in the continued expansion of the extractive frontier into indigenous territory in the Amazon, including areas occupied by peoples living in voluntary isolation. Among these forces are legal and extracurricular payments made to individuals, within indigenous communities and in state entities, and the use of tax havens to deposit unofficial payments made to secure public contracts. Solutions to loss of biodiversity and climate change may be found as much in the transformation of global financial and tax systems in terms of transparency and accountability, as in efforts by states, intergovernmental institutions and private foundations to protect wild areas through the designation of national parks, through climate finance, and other “sustainable” investment strategies.