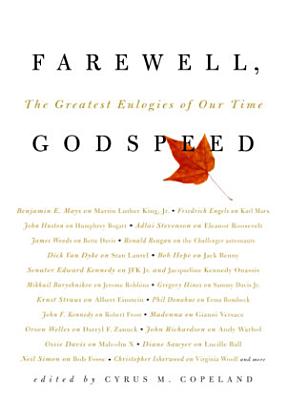 Farewell, Godspeed is a remarkable collection of eulogies for some of the most notable figures of our time, delivered by the people who knew them best. In the words used to eulogize the great and celebrated men and women of the world—sometimes reverential, sometimes funny, always poignant—we come as close as perhaps we ever will to seeing the warm humanity beneath their public personas. Cyrus M. Copeland has gathered some of the greatest of these writings about artists, scientists, authors, public servants, entertainers, and others who have captured our attention by making the world a better, or at least a livelier, place. Here is Andy Warhol’s close friend describing Warhol’s hidden spirituality. Albert Einstein’s assistant recounting his humanism. Edward Kennedy remembering with a brother’s tenderness the life of Jacqueline Kennedy Onassis. Larry McMurtry’s lively and loving tribute to Irving “Swifty” Lazar. And Robert Bernstein, longtime publisher and friend of Dr. Seuss, memorializing him with special, never-before-published verse. Also included are the eulogies of the Challenger astronauts by President Ronald Reagan; Charles Schulz by Cathy Guisewite (creator of the comic strip Cathy); Bette Davis by James Woods; Bob Fosse by Neil Simon; Lucille Ball by Diane Sawyer; Martin Luther King Jr. by Benjamin E. Mays; David O. Selznick by Truman Capote; Karl Marx by Friedrich Engels; and Gianni Versace by Madonna. In these moving and personal tributes we see at last the vulnerabilities and nuances of character that are often hidden from the spotlight, and the true personalities behind the names we remember.

Authors: Cyrus M. Copeland
Categories: Literary Collections
Farewell, Godspeed is a remarkable collection of eulogies for some of the most notable figures of our time, delivered by the people who knew them best. In the w

Authors: Joe Kovacs
Categories: Religion
The answer is surprising, and what we’re about to learn will wake us up to a reality most of us never knew existed. The reason we’re so oblivious is because

It Doesn't Take a Hero

Authors: Andrew McRae
Categories: Business & Economics
An interdisciplinary analysis of the history and literature of the land in early modern England.