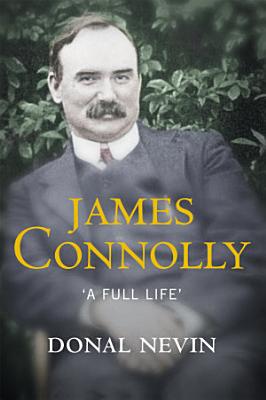 ‘Hasn’t it been a full life, Lillie, and isn’t this a good end?’, were James Connolly’s last words to his wife in Dublin Castle in the early hours of 12 May 1916 just before his execution for his part in leading the Easter Rising. James Connolly, the son of Irish immigrants, was born in Edinburgh. The first fourteen years of his life were spent in Edinburgh and the next seven years in the King’s Liverpool Regiment in Ireland. In 1889, he returned to Edinburgh where he was a socialist activist and organiser for seven years. In 1896, at the age of 28, he was invited to Dublin as socialist organiser, founding the Irish Republican Socialist Party and editing The Workers’ Republic. Connolly spent seven years in America between 1903 and 1910, returning to Ireland in 1910 as organiser of the Socialist Party of Ireland. Connolly was appointed Ulster Organiser of the Irish Transport and General Workers’ Union by James Larkin, succeeding him as acting general secretary in October 1914. As Commander of the Irish Citizen Army, Connolly joined with leaders of the Irish Republican Brotherhood in the Easter Rising in 1916, becoming Commandant-General of the Dublin Division of the Army of the Republic and Vice-President of the Provisional Government of the Irish Republic. For their part in the Easter Rising, Connolly and thirteen of his fellow revolutionaries were executed in Kilmainham Gaol by the British government. Connolly, the last to be executed, was wounded in the Rising and had to be strapped to a chair to face the firing squad. This biography deals with Connolly’s activities as soldier, agitator, propagandist, orator, socialist organiser, pamphleteer, trade union leader, insurgent, and traces the evolution of his political thinking as social democrat, revolutionist, syndicalist, revolutionary socialist, insurrectionist. It is based largely on Connolly’s prolific writings in twenty-seven journals in Scotland, England, Ireland, France and America, and some 200 letters which are particularly revealing of his relationships with colleagues. James Connolly is the very best survey of Connolly’s remarkable life and times. James Connolly, A Full Life: Table of Contents Preface by Des Geraghty PART I Edinburgh 1868–1882 PART II Ireland 1882–1889 PART III Edinburgh 1889–1896: Social Democrat PART IV Dublin 1890–1903: Revolutionist PART V America 1903–1910: Syndicalist PART VI Writings PART VII Ireland 1910–1916 The Red and the Green: Revolutionary Socialist–Insurrectionist PART VIII Revolutionary Thinker APPENDICES

Authors: Donal Nevin
Categories: Political Science
‘Hasn’t it been a full life, Lillie, and isn’t this a good end?’, were James Connolly’s last words to his wife in Dublin Castle in the early hours of

Authors: Sean O'Callaghan
Categories: Biography & Autobiography
FROM THE FORMER IRA MEMBER AND AUTHOR OF THE INFORMER, SEAN O'CALLAGHAN 'Very interesting on how fanaticism can develop within a community, and especially relev

Authors: James Connolly
Categories: Political Science
'To those who are on the look out for a detailed introduction to the life and works of Connolly, there are surely few better place to make a start ... Essential

The Life and Times of James Connolly

Authors: C. Desmond Greaves
Categories: Ireland
James Connolly, Irish Socialist Republican and greatest of all Irish labour leaders, was shot - strapped to a chair because his wounds forbade him to stand - by

Authors: Lorcan Collins
Categories: Political Science
James Connolly (1868-1916) became a leading Irish socialist and revolutionary, and was one of the leaders of Ireland's rebellion in 1916. As a youth he had serv

Authors: Paul Buhle
Categories: History
Executed by a British firing squad on 12th May 1916 for his role in organizing the Easter Rising, James Connolly was one of the most prominent radical organizer

Authors: James Connolly
Categories: History
James Connolly served in the British Army for seven years but would go on to lead the 1916 Irish Rising against British rule in Dublin. Following service he joi