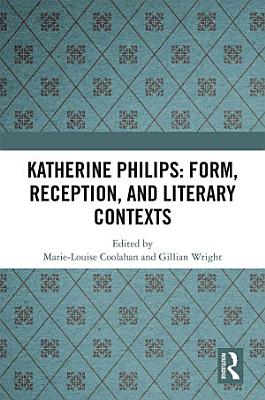 Katherine Philips (1632–1664) is widely regarded as a pioneering figure within English-language women’s literary history. Best known as a poet, she was also a skilled translator, letter writer and literary critic whose subjects ranged from friendship and retirement to politics and public life. Her poetry achieved a high reputation among coterie networks in London, Wales and Ireland during her lifetime, and was published to great acclaim after her death. The present volume, drawing on important recent research into her early manuscripts and printed texts, represents a new and innovative phase in Philips's scholarship. Emphasizing her literary responses to other writers as well as the ambition and sophistication of her work, it includes groundbreaking studies of her use of form and genre, her practices as a translator, her engagement with philosophy and political theory, and her experiences in Restoration Dublin. It also examines the posthumous reception of Philips’s poetry and model theoretical and digital humanities approaches to her work. This book was originally published as two special issues of Women’s Writing.

Women’s Writing from Wales before 1914

Authors: Andrew Smith
Categories: Literary Criticism
This volume broadens the critical understanding of Ann Radcliffe’s work and includes explorations of the publication history of her work, her engagement with

The Oxford Handbook of Eighteenth-Century Satire

Authors: Paddy Bullard
Categories: Literary Criticism
Eighteenth century Britain thought of itself as a polite, sentimental, enlightened place, but often its literature belied this self-image. This was an age of sa

The Work of Form

Early modern women and the poem

Authors: Susan Wiseman
Categories: Literary Criticism
Viewing the poem as a social agent and product in women’s lives, the essays in this collection examine factors influencing the relationships between writers a

Authors: P. Pender
Categories: Literary Criticism
This collection examines the diverse material cultures through which early modern women's writing was produced, transmitted, and received. It focuses on the way