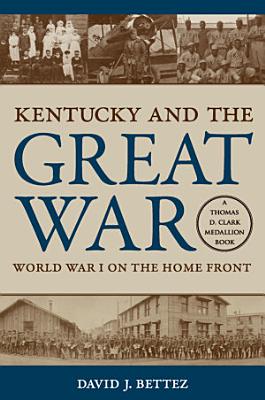 The award-winning author of Kentucky Marine “has crafted an excellent account of how World War I impacted Kentucky socially, economically, and politically” (Journal of America’s Military Past). From five thousand children marching in a parade, singing, “Johnnie get your hoe . . . Mary dig your row,” to communities banding together to observe Meatless Tuesdays and Wheatless Wednesdays, Kentuckians were loyal supporters of their country during the First World War. Kentucky had one of the lowest rates of draft dodging in the nation, and the state increased its coal production by 50 percent during the war years. Overwhelmingly, the people of the Commonwealth set aside partisan interests and worked together to help the nation achieve victory in Europe. David J. Bettez provides the first comprehensive analysis of the impact of the Great War on Bluegrass society, politics, economy, and culture, contextualizing the state’s involvement within the national experience. His exhaustively researched study examines the Kentucky Council of Defense—which sponsored local war-effort activities—military mobilization and preparation, opposition and dissent, and the role of religion and higher education in shaping the state’s response to the war. It also describes the efforts of Kentuckians who served abroad in military and civilian capacities, and postwar memorialization of their contributions. Kentucky and the Great War explores the impact of the conflict on women’s suffrage, child labor, and African American life. In particular, Bettez investigates how black citizens were urged to support a war to make the world “safe for democracy” even as their civil rights and freedoms were violated in the Jim Crow South. This engaging and timely social history offers new perspectives on an overlooked aspect of World War I.

Kentucky and the Great War

Authors: Randy Bishop
Categories: History
A description of major battle sites, past and present. Such battles as Paducah, Perryville, and Middle Creek played a significant role in the outcome of the Civ

The Most Hated Man in Kentucky

Authors: Brad Asher
Categories: History
For the last third of the nineteenth century, Union General Stephen Gano Burbridge enjoyed the unenviable distinction of being the most hated man in Kentucky. F

Authors: James A. Ramage
Categories: History
Kentucky’s first settlers brought with them a dedication to democracy and a sense of limitless hope about the future. Determined to participate in world progr

Colonels in Blue—Indiana, Kentucky and Tennessee

The Wild Riders of the First Kentucky Cavalry

Authors:
Categories: History
A chronology of events, a history of the parishes, family histories.

Knox County, Kentucky: History Revealed Through Biographical and Genealogical Sketches of Its Ancestors

Authors: M. Secrist
Categories: History
This publication aims to served as a valuable resource for your genealogical research of your Knox County ancestors. Many biographical and genealogical sketches