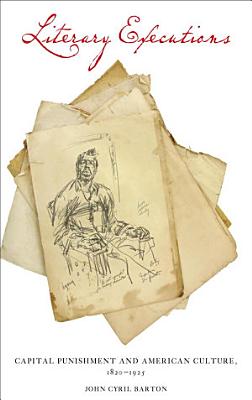 "In Literary Executions, John Barton analyzes nineteenth-century representations of, responses to, and arguments for and against the death penalty in the United States. The author creates a generative dialogue between artistic relics and legal history. Novels, short stories, poems, and creative nonfiction engage with legislative reports, trial transcripts, legal documents, newspaper and journal articles, treatises, and popular books (like The Record of Crimes and The Gallows, the Prison, and the Poor House), all of which participated in the debate over capital punishment. Barton focuses on several canonical figures--James Fenimore Cooper, Nathaniel Hawthorne, Lydia Maria Child, Walt Whitman, Herman Melville, and Theodore Dreiser--and offers new readings of their work in light of the death penalty controversy. Barton also gives close attention to a host of then-popular-but-now-forgotten writers--particularly John Neal, Slidell MacKenzie, William Gilmore Simms, Sylvester Judd, and George Lippard--whose work helped shape or was in turn shaped by the influential anti-gallows movement. As illustrated in the book's epigraph by Samuel Johnson -- "Depend upon it Sir, when a man knows he is to be hanged in a fortnight, it concentrates his mind wonderfully" -- Barton argues that the high stakes of capital punishment dramatize the confrontation between the citizen-subject and sovereign authority. In bringing together the social and the aesthetic, Barton traces the emergence of the modern State's administration of lawful death. The book is intended primarily for literary scholars, but cultural and legal historians will also find value in it, as will anyone interested in the intersections among law, culture, and the humanities"--

Authors: John Cyril Barton
Categories: Law
"In Literary Executions, John Barton analyzes nineteenth-century representations of, responses to, and arguments for and against the death penalty in the United

Authors: Gale Research Company
Categories: Art and literature
Excerpts from criticism of the works of novelists, poets, playwrights, and other creative writers, 1900-1960.

The Saturday Review of Politics, Literature, Science and Art

A Critical Dictionary of English Literature, and British and American Authors

A Critical Dictionary of English Literature and British and American Authors, Living and Deceased, from the Earliest Account to the Latter Half of the Nineteenth Century

The Eclectic Magazine of Foreign Literature, Science, and Art

Notes on the Literature of Church History