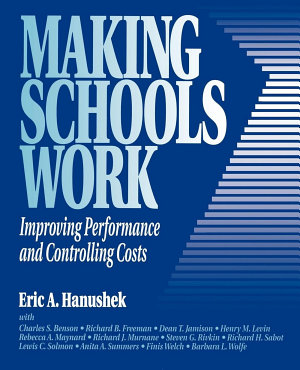 Educational reform is a big business in the United States. Parents, educators, and policymakers generally agree that something must be done to improve schools, but the consensus ends there. The myriad of reform documents and policy discussions that have appeared over the past decade have not helped to pinpoint exactly what should be done. The case for investment in education is an economic one: schooling improves the productivity and earnings of individuals and promotes stronger economic growth and better functioning of society. Recent trends in schooling have, however, lessened the value of society's investments as costs have risen dramatically while student performance has stayed flat or even fallen. The task is to improve performance while controlling costs. This book is the culmination of extensive discussions among a panel of economists led by Eric Hanushek. They conclude that economic considerations have been entirely absent from the development of educational policies and that economic reality is sorely needed in discussions of new policies. The book outlines an improvement plan that emphasizes changing incentives in schools and gathering information about effective approaches. Available research and analysis demonstrates that current central decisionmaking has worked poorly. Concentrating on inputs such as pupil-teacher ratios or teacher graduate degrees appears quite inferior to systems that directly reward performance. Nonetheless, since experience with such alternatives is very limited, a program of extensive evaluation appears to be in order. Attempts to institute radical change on the basis of currently available information involve substantial risks of failure. Many people today find proposals such as charter schools, expanded use of merit pay, or educational vouchers to be appealing. Yet there is little evidence of their effectiveness, and widespread adoption of these proposals is sure to run into substantial problems of implementation. Instead of choosing the "right" approach, this book advocates a more systematic approach of experimentation, evaluation, and change. In addition to Hanushek, the contributors are Charles S. Benson, University of California, Berkeley; Richard B. Freeman, Harvard University; Dean T. Jamison, UCLA: Henry M. Levin, Stanford University; Rebecca A. Maynard, University of Pennsylvania; Richard J. Murnane, Harvard University; Steven G. Rivkin, Amherst College; Richard H. Sabot, Williams College; Lewis C. Solmon, Milken Institute for Job and Capital Formation; Anita A. Summers, University of Pennsylvania; Finis Welch, Texas A&M University; and Barbara L. Wolfe, University of Wisconsin.

Authors: Eric A. Hanushek
Categories: Political Science
Educational reform is a big business in the United States. Parents, educators, and policymakers generally agree that something must be done to improve schools,

Authors: Barbara Bruns
Categories: Education
"This book is about the threats to education quality in the developing world that cannot be explained by lack of resources. It reviews the observed phenomenon o

Making Schools Work for Every Child

Authors: University of California, Los Angeles. Center for Research on Evaluation, Standards, and Student Testing
Categories: Education
Americans are seeking education reform, particularly for the underachieving minority student. Many programs have been developed but are not yet validated. This

Authors: Carolyn R. Hodges
Categories: Education
When talking about marginality and «otherness», one must always ask, marginal to what? Other to whom? Complex issues of identity construction have been the fo