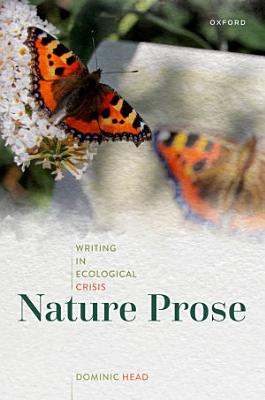 Nature Prose seeks to explain the popularity and appeal of contemporary writing about nature. This book intervenes in key areas of contemporary debate about literature and the environment and explores the enduring appeal of writing about nature during an ecological crisis. Using a range of international examples, with a focus on late twentieth- and early twenty-first-century writing from Britain and the US, Dominic Head argues that nature writing contains formal effects which encapsulate our current ecological dilemma and offer a fresh resource for critical thinking. The environmental crisis has injected a fresh urgency into nature writing, along with a new piquancy for those readers seeking solace in the nonhuman, or for those looking to change their habits in the face of ecological catastrophe. However, behind this apparently strong match between the aims of nature writers and the desires of their readers, there is also a shared mood of radical uncertainty and insecurity. The treatment and construction of 'nature' in contemporary imaginative prose reveals some significant paradoxes beneath its dominant moods, moods which are usually earnest, sometimes celebratory, sometimes prophetic or cautionary. It is in these paradoxical moments that the contemporary ecological crisis is formally encoded, in a progressive development of ecological consciousness from the late 1950s onwards. Nature prose, fiction and nonfiction, is now contemporaneous with a defining time of crisis, while also being formally fashioned by that context. This is a mode of writing that emerges in a world in crisis, but which is also, in some ways, in crisis itself. With chapters on remoteness, exclusivity, abundance, and rarity, this book marks a turning point in how literary criticism engages with nature writing.