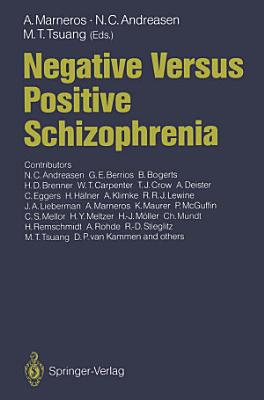 The positive versus negative distinction of schizophrenic disorders has pro moted ongoing research. Phenomenology, psychopathology, biology, genet ics, pharmacological and nonpharmacological treatment, psychosocial and longitudinal research: all have found a new focus of interest. This volume attempts to provide an unbiased picture of the status of American and Eu ropean knowledge regarding the positive/negative distinction. Researchers from North America and Europe describe the relation of modern concepts of positive and negative symptomatology to the original models of Rey nolds and Jackson. Integrating phenomenological, genetic, and biological factors, the authors depict current methods of assessing positive and nega tive symptomatology, differentiating between primary and secondary symp tomatology, and using pharmacological and nonpharmacological treatment. The stability of positive and negative symptoms over time and evidence for the occurrence of separate positive and negative episodes over a long-term course of schizophrenia are extensively discussed in terms of their implica tions on the positive/negative construct. The relevance of the positive/nega tive dichotomy to child and adolescent schizophrenia is also debated. The main aim of this book is not to advocate a single concept and present only arguments supporting it, but to discuss important controversies. Prob lems concerning a concept cannot be solved by ignoring them. However, unanswered questions may be resolved through discussion, debate, and con structive compromise.

Authors: Daniel R. Weinberger
Categories: Medical
Schizophrenia is one of the most complex and disabling diseases to affect mankind. Relatively little is known about its nature and its origins, and available tr

DSM-IV Subtypes Vs. the Positive and Negative Symptom Scale as Predictors of Emotion Recognition in Schizophrenia

Authors: Dan Zahavi
Categories: Psychology
The aim of this volume is to discuss recent research into self-experience and its disorders, and to contribute to a better integration of the different empirica