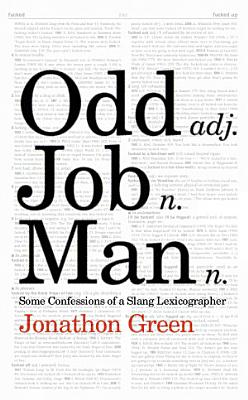 For thirty years Jonathon Green has been collecting slang – the indefinable language of the gutter, the brothel, the jail, the barroom – producing a succession of dictionaries, most recently the three-volume Green's Dictionary of Slang, that have been recognised as the most comprehensive and authoritative ever compiled. In this fascinating memoir Green reveals that he first began collecting slang in the 1970s, noticing that the contemporary authorities (notably Eric Partridge) preferred the past to the present, unaware of the huge array of new slang being coined by the counter-culture. He ponders why he still does this strange, lonely job, exploring the satisfaction that can be gained by tracking down the first use of a term just encountered in one of the cheap dime novels he devours for research. The lexis leans towards pimping and prostitution, crime and imprisonment, violence and cruelty, drunken and drugged debauches: what does this say about the man who spends every day truffling for it? A fascinating look at how one man has built a lexis of 125,000 words that includes 1,740 words for sexual intercourse, 1,351 for the penis, 540 for defecation/urination, 247 for fat, 219 for vomiting and 180 for anal sex, Odd Job Man will delight all those who love the words that the conventional dictionaries leave out.

Authors: Jonathon Green
Categories: Language Arts & Disciplines
For thirty years Jonathon Green has been collecting slang – the indefinable language of the gutter, the brothel, the jail, the barroom – producing a success

A Tale of Two Cities