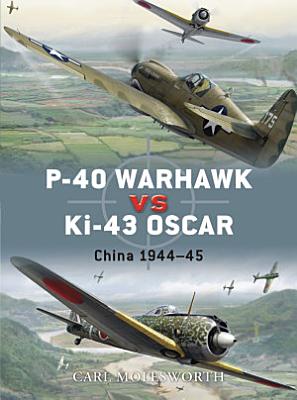 Known for the distinctive 'sharkmouth' decoration on their noses, P-40 fighters first saw combat in China during World War II. Their most common adversary was the Japanese Nakajima Ki-43, nicknamed 'Oscar.' Carl Molesworth describes and explains the design and development of these two foes, the products of two vastly different philosophies of fighter design. The P-40 was heavily armed and sturdy with armour protection and self-sealing fuel tanks, but paid for this with the loss of speed and a sluggish performance at altitude. The Ki-43 was a rapier to the battleaxe P-40 and the Ki-43 was immensely nimble, though with less firepower and durability. This book examines these two different fighters, and the pilots who flew them over China, with an action-packed text, rare photographs and digital artwork.

Authors: Edward M. Young
Categories: History
In reviewing reports of air combat from Spain, China and the early stages of the war in Europe, the US Army Air Corps called for heavier armor and armament for

Authors: Carl Molesworth
Categories: History
Although the P-40 and the Bf 109 joined the air war over North Africa at nearly the same time in 1941, the German fighter had already racked up a considerable c

Authors: Peter Ingman
Categories: History
The P-40E Warhawk is often viewed as one of the less successful American fighter designs of World War II, but in 1942 the aircraft was all that was available to

Authors: Robert Forczyk
Categories: History
The RAF introduced the Avro Lancaster in 1942 and used it to spearhead this aerial offensive. In response, the Luftwaffe created an elite nightfighter force bas

Authors: Lon Nordeen
Categories: History
Designed for the battlefields of Europe at the height of the Cold War, the M60 and T-62 were the premier combat tanks of their day. However, it was in the deser

Authors: Gordon Williamson
Categories: History
Winston Churchill claimed the 'U-boat peril' was the only thing that frightened him during World War II. The U-boat was developed from a small coastal vessel in

Authors: Mark Lardas
Categories: History
In the Age of Fighting Sail (1650–1820), ambitious officers of the navies of many nations sought command of a frigate. Speedy, nimble and formidably armed, fr