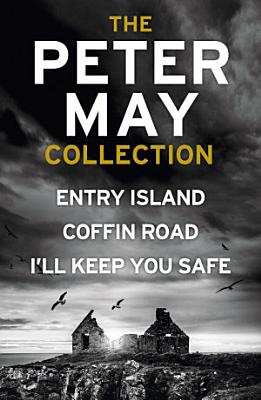 #1 BESTSELLING AUTHOR OF THE BLACKHOUSE 'A TERRIFIC WRITER' MARK BILLINGHAM **PETER MAY: OVER 4.5 MILLION COPIES SOLD WORLDWIDE* A collection of Peter May's bestselling standalone titles, this omnibus edition includes Entry Island, Coffin Road and I'll Keep You Safe. -------------------- ENTRY ISLAND A detective is haunted by the feeling he knows his murder suspect - despite the fact they have never met. IF YOU FLEE FATE... When Detective Sime Mackenzie is sent from Montreal to investigate a murder on the remote Entry Island, 850 miles from the Canadian mainland, he leaves behind him a life of sleeplessness and regret. FATE WILL FIND YOU... But what had initially seemed an open-and-shut case takes on a disturbing dimension when he meets the prime suspect, the victim's wife, and is convinced that he knows her - even though they have never met. And when his insomnia becomes punctuated by dreams of a distant Scottish past in another century, this murder in the Gulf of St. Lawrence leads him down a path he could never have foreseen, forcing him to face a conflict between his professional duty and his personal destiny. -------------------- COFFIN ROAD A man stands bewildered on a deserted beach on the Hebridean Isle of Harris. He cannot remember who he is. The only clue to his identity is a folded map of a path named the Coffin Road. He does not know where this search will take him. A detective from Lewis sits aboard a boat, filled with doubt. DS George Gunn knows that a bludgeoned corpse has been discovered on a remote rock twenty miles offshore. He does not know if he has what it takes to uncover how and why. A teenage girl lies in her Edinburgh bedroom, desperate to discover the truth about her scientist father's suicide. Two years on, Karen Fleming still cannot accept that he would wilfully abandon her. She does not yet know his secret. Coffin Road follows three perilous journeys towards one shocking truth - and the realisation that ignorance can kill us. -------------------- I'LL KEEP YOU SAFE A stunning standalone thriller from Peter May, alternating between the glamorous fashion world of Paris and the rugged beauty of the Isle of Harris. WHATEVER HAPPENS Niamh and Ruairidh Macfarlane co-own the Hebridean company Ranish Tweed. On a business trip to Paris to promote their luxury brand, Niamh learns of Ruairidh's affair, and then looks on as he and his lover are killed by a car bomb. She returns home to Lewis, bereft. I'LL ALWAYS BE THERE FOR YOU Niamh begins to look back on her life with Ruairidh, desperate to identify anyone who may have held a grudge against him. The French police, meanwhile, have ruled out terrorism, and ruled in murder - and sent Detective Sylvie Braque to shadow their prime suspect: Niamh. I'LL KEEP YOU SAFE, NO MATTER WHAT As one woman works back through her memories, and the other moves forward with her investigation, the two draw ever closer to a deadly enemy with their own, murderous, designs.

The Peter May Collection

From Categories to Homotopy Theory

Authors: Birgit Richter
Categories: Mathematics
Category theory provides structure for the mathematical world and is seen everywhere in modern mathematics. With this book, the author bridges the gap between p

Authors: CSB Bibles by Holman
Categories: Bibles
The CSB Study Bible continues to offer the ECPA award winning Holman study system with over 16,000 study notes and tools uniquely designed to be on the same pag

Authors: CSB Bibles by Holman
Categories: Bibles
The CSB Study Bible continues to offer the ECPA award winning Holman study system with over 16,000 study notes and tools uniquely designed to be on the same pag

Terrorism and Nationalism in the United Kingdom

Authors: Nick Brooke
Categories: Political Science
This book ​makes a timely contribution to the analysis of nationalism and terrorism, and also the absence of terrorism. It proposes to analyse why Scottish, W

Authors: CSB Bibles by Holman
Categories: Bibles
Charles Spurgeon has been called the “Prince of Preachers.” He preached to over 10 million people in his lifetime, and his written sermons have impacted mil

Verb-second as a reconstruction phenomenon

Authors: Constantin Freitag
Categories: Language Arts & Disciplines
This investigation of V2-movement addresses the question which role the lexical content of the moved element plays during sentence processing. It draws on origi