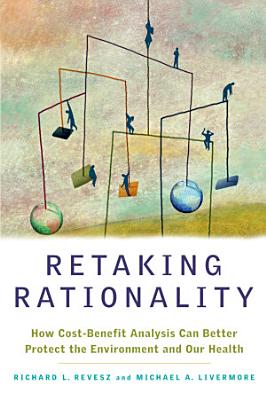 That America's natural environment has been degraded and despoiled over the past 25 years is beyond dispute. Nor has there been any shortage of reasons why-short-sighted politicians, a society built on over-consumption, and the dramatic weakening of environmental regulations. In Retaking Rationality, Richard L. Revesz and Michael A. Livermore argue convincingly that one of the least understood-and most important-causes of our failure to protect the environment has been a misguided rejection of reason. The authors show that environmentalists, labor unions, and other progressive groups have declined to participate in the key governmental proceedings concerning the cost-benefit analysis of federal regulations. As a result of this vacuum, industry groups have captured cost-benefit analysis and used it to further their anti-regulatory ends. Beginning in 1981, the federal Office of Management and Budget and the federal courts have used cost-benefit analysis extensively to determine which environmental, health, and safety regulations are approved and which are sent back to the drawing board. The resulting imbalance in political participation has profoundly affected the nation's regulatory and legal landscape. But Revesz and Livermore contend that economic analysis of regulations is necessary and that it needn't conflict with-and can in fact support-a more compassionate approach to environmental policy. Indeed, they show that we cannot give up on rationality if we truly want to protect our natural environment. Retaking Rationality makes clear that by embracing and reforming cost-benefit analysis, and by joining reason and compassion, progressive groups can help enact strong environmental and public health regulation.

Authors: Richard L. Revesz
Categories: Law
That America's natural environment has been degraded and despoiled over the past 25 years is beyond dispute. Nor has there been any shortage of reasons why-shor

Authors: Michael A. Livermore
Categories: Law
For decades, administrations of both political parties have used cost-benefit analysis to evaluate and improve federal policy in a variety of areas, including h

Happiness and the Law

Authors: John Bronsteen
Categories: Business & Economics
Happiness and the law the two concepts seem to have little to do with one another. To some people, they may even seem diametrically opposed. Yet, one of the thi

Authors: Michael A. Livermore
Categories: Business & Economics
Cost-benefit analysis -- the formal estimating and weighing of the costs and benefits of policy alternatives -- is a standard tool for governments in advanced e

The Oxford Handbook of Behavioral Economics and the Law

Authors: Eyal Zamir
Categories: Business & Economics
The past twenty years have witnessed a surge in behavioral studies of law and law-related issues. These studies have challenged the application of the rational-

Authors: Gernot Wagner
Categories: Business & Economics
How knowing the extreme risks of climate change can help us prepare for an uncertain future If you had a 10 percent chance of having a fatal car accident, you'd

The Scales of Weighing Regulatory Costs

Authors: Jamison E. Colburn
Categories: Law
This book examines the calculation and evaluation of regulatory costs by regulators in accordance with a legislative mandate. A serious limitation in that enter

Authors: Edward H. Stiglitz
Categories: Law
Administrative bodies, not legislatures, are the primary lawmakers in our society. This book develops a theory to explain this fact based on the concept of trus