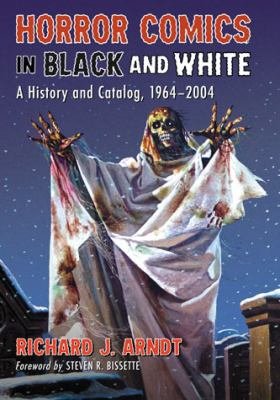 In 1954, the comic book industry instituted the Comics Code, a set of self-regulatory guidelines imposed to placate public concern over gory and horrific comic book content, effectively banning genuine horror comics. Because the Code applied only to color comics, many artists and writers turned to black and white to circumvent the Code's narrow confines. With the 1964 publication of Creepy #1 by Warren Publishing, black-and-white horror comics experienced a revival that continued into the early 21st century, marking an important step in the maturation of the horror genre within comics and the comics field as a whole. This generously illustrated work offers a comprehensive history and retrospective of the black-and-white horror comics that flourished on the newsstands from 1964 to 2004. With a catalog of original magazines, complete credits and insightful analysis, it highlights an important but overlooked period in the history of comics.

Horror Comics in Black and White

A Unit of Water, A Unit of Time

Authors: Douglas Whynott
Categories: Crafts & Hobbies
When one of the world's great boat builders is diagnosed with cancer, he begins working on his last boat in the Brooklin Boat Yard, in a profound and moving stu

Authors: Grier Harris
Categories: History
This is Volume 1 of a 2-part genealogy of the Harris family, tracing the lineage of Robert Harris Sr. (1702-1788). This work is part of The Families of Old Harr

Recovery in Black and White in America (PB)

Authors: Martin J. Lee
Categories: Self-Help
Recovery in Black and White in America By: Martin J. Lee Our nation’s youth are in the grips of an opioid crisis. Young and old addicts are overdosing and dyi