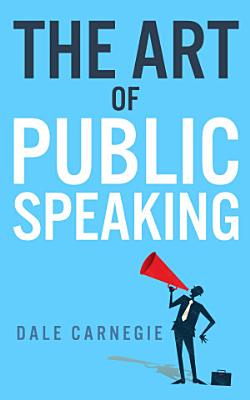 The Art of Public Speaking is a fantastic introduction to public speaking by the master of the art, Dale Carnegie. Public speaking is the process of speaking to a group of people in a structured, deliberate manner intended to inform, influence, or entertain the listeners. It is closely allied to "presenting", although the latter has more of a commercial connotation. In public speaking, as in any form of communication, there are five basic elements, often expressed as "who is saying what to whom using what medium with what effects?" The purpose of public speaking can range from simply transmitting information, to motivating people to act, to simply telling a story. Good orators should be able to change the emotions of their listeners, not just inform them. Public speaking can also be considered a discourse community. Interpersonal communication and public speaking have several components that embrace such things as motivational speaking, leadership/personal development, business, customer service, large group communication, and mass communication. Public speaking can be a powerful tool to use for purposes such as motivation, influence, persuasion, informing, translation, or simply entertaining. A confident speaker is more likely to use this as excitement and create effective speech thus increasing their overall ethos. Dale Breckenridge Carnegie (originally Carnagey until 1922 and possibly somewhat later) (November 24, 1888 – November 1, 1955) was an American writer, lecturer, and the developer of famous courses in self-improvement, salesmanship, corporate training, public speaking, and interpersonal skills. Born in poverty on a farm in Missouri, he was the author of How to Win Friends and Influence People (1936), a massive bestseller that remains popular today. He also wrote How to Stop Worrying and Start Living (1948), Lincoln the Unknown (1932), and several other books. Perhaps one of Carnegie’s most successful marketing moves was to change the spelling of his last name from “Carnagey” to Carnegie, at a time when Andrew Carnegie (unrelated) was a widely revered and recognized name. By 1916, Dale was able to rent Carnegie Hall itself for a lecture to a packed house. Carnegie's first collection of his writings was Public Speaking: a Practical Course for Business Men (1926), later entitled Public Speaking and Influencing Men in Business (1932). His crowning achievement, however, was when Simon & Schuster published How to Win Friends and Influence People. The book was a bestseller from its debut in 1936, in its 17th printing within a few months. By the time of Carnegie's death, the book had sold five million copies in 31 languages, and there had been 450,000 graduates of his Dale Carnegie Institute. It has been stated in the book that he had critiqued over 150,000 speeches in his participation in the adult education movement of the time. During World War I he served in the U.S. Army. One of the core ideas in his books is that it is possible to change other people's behavior by changing one's reaction to them.