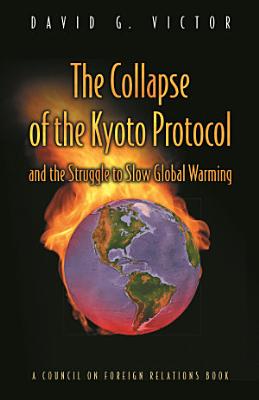 Even as the evidence of global warming mounts, the international response to this serious threat is coming unraveled. The United States has formally withdrawn from the 1997 Kyoto Protocol; other key nations are facing difficulty in meeting their Kyoto commitments; and developing countries face no limit on their emissions of the gases that cause global warming. In this clear and cogent book-reissued in paperback with an afterword that comments on recent events--David Victor explains why the Kyoto Protocol was never likely to become an effective legal instrument. He explores how its collapse offers opportunities to establish a more realistic alternative. Global warming continues to dominate environmental news as legislatures worldwide grapple with the process of ratification of the December 1997 Kyoto Protocol. The collapse of the November 2000 conference at the Hague showed clearly how difficult it will be to bring the Kyoto treaty into force. Yet most politicians, policymakers, and analysts hailed it as a vital first step in slowing greenhouse warming. David Victor was not among them. Kyoto's fatal flaw, Victor argues, is that it can work only if emissions trading works. The Protocol requires industrialized nations to reduce their emissions of greenhouse gases to specific targets. Crucially, the Protocol also provides for so-called "emissions trading," whereby nations could offset the need for rapid cuts in their own emissions by buying emissions credits from other countries. But starting this trading system would require creating emission permits worth two trillion dollars--the largest single invention of assets by voluntary international treaty in world history. Even if it were politically possible to distribute such astronomical sums, the Protocol does not provide for adequate monitoring and enforcement of these new property rights. Nor does it offer an achievable plan for allocating new permits, which would be essential if the system were expanded to include developing countries. The collapse of the Kyoto Protocol--which Victor views as inevitable--will provide the political space to rethink strategy. Better alternatives would focus on policies that control emissions, such as emission taxes. Though economically sensible, however, a pure tax approach is impossible to monitor in practice. Thus, the author proposes a hybrid in which governments set targets for both emission quantities and tax levels. This offers the important advantages of both emission trading and taxes without the debilitating drawbacks of each. Individuals at all levels of environmental science, economics, public policy, and politics-from students to professionals--and anyone else hoping to participate in the debate over how to slow global warming will want to read this book.

Authors: David G. Victor
Categories: Political Science
Even as the evidence of global warming mounts, the international response to this serious threat is coming unraveled. The United States has formally withdrawn f

Authors: David G. Victor
Categories: Political Science
Global warming is one of today's greatest challenges. The science of climate change leaves no doubt that policies to cut emissions are overdue. Yet, after twent

Authors: Dana Fisher
Categories: Political Science
This book follows the groundbreaking Kyoto Protocol from the time of its drafting in 1997 to analyze its viability as an environmental treaty. Dana R. Fisher us

Authors: Nikos Lavranos
Categories: Law
The title of the Hague Yearbook of International Law reflects the close ties which have always existed between the AAA and the City of The Hague with its intern

Authors: Rafael Leal-Arcas
Categories: Law
Rafael Leal-Arcas expertly examines the interface of climate change mitigation and international trade law with a view to addressing the question: How can we ma

Authors: Robert G. Strom
Categories: Nature
Global warming is addressed by almost all sciences including many aspects of geosciences, atmospheric, the biological sciences, and even astronomy. It has recen

Authors: Bernhard May
Categories: Social Science
The book investigates US foreign policy in today's process of transformation. It shows how domestic factors determine more and more the superpower's paradigm of

Authors: Thomas L Muinzer
Categories: Law
This groundbreaking book collects contributions from many of the world's leading climate and energy law scholars and provides the first major study of national

Authors: Daniel Bodansky
Categories: Law
This textbook, by three experts in the field, provides a comprehensive overview of international climate change law. Climate change is one of the fundamental ch