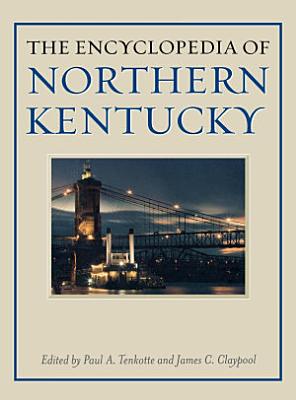 The Encyclopedia of Northern Kentucky is the authoritative reference on the people, places, history, and rich heritage of the Northern Kentucky region. The encyclopedia defines an overlooked region of more than 450,000 residents and celebrates its contributions to agriculture, art, architecture, commerce, education, entertainment, literature, medicine, military, science, and sports. Often referred to as one of the points of the "Golden Triangle" because of its proximity to Lexington and Louisville, Northern Kentucky is made up of eleven counties along the Ohio River: Boone, Bracken, Campbell, Carroll, Gallatin, Grant, Kenton, Mason, Owen, Pendleton, and Robertson. With more than 2,000 entries, 170 images, and 13 maps, this encyclopedia will help readers appreciate the region's unique history and culture, as well as the role of Northern Kentucky in the larger history of the Commonwealth of Kentucky and the nation. Describes the "Golden Triangle" of Kentucky, an economically prosperous area with high employment, investment, and job-creation rates Contains entries on institutions of higher learning, including Northern Kentucky University, Thomas More College, and three community and technical colleges Details the historic cities of Covington, Newport, Bellevue, Dayton, and Ludlow and their renaissance along the shore of the Ohio River Illustrates the importance of the Cincinnati / Northern Kentucky International Airport as well as major corporations such as Ashland, Fidelity Investments, Omnicare, Toyota North America, and United States Playing Card

The Encyclopedia of Northern Kentucky

A Brief History of Northern Kentucky

Authors: Robert D. Webster
Categories: History
Thousands of years ago, the land that would become Northern Kentucky emerged above sea level when a large portion of the continental plate bulged upward. Today,

Authors: James C. Clinger
Categories: Political Science
The cornerstone of the American republic is an educated, active, and engaged citizenry; however, the multifaceted inner workings of government and the political

Authors: Gerald L. Smith
Categories: Reference
The story of African Americans in Kentucky is as diverse and vibrant as the state's general history. The work of more than 150 writers, The Kentucky African Ame

Authors: James A. Ramage
Categories: History
Kentucky’s first settlers brought with them a dedication to democracy and a sense of limitless hope about the future. Determined to participate in world progr

Authors: James C. Klotter
Categories: History
When originally published, A New History of Kentucky provided a comprehensive study of the Commonwealth, bringing it to life by revealing the many faces, deep t

Cincinnati in the Civil War: The Union's Queen City

Kentucky and the Great War