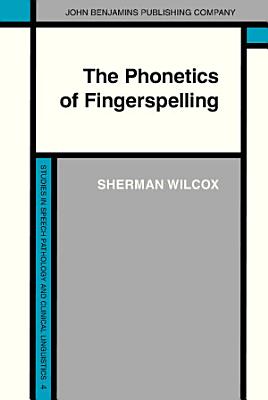 We now know that natural signed languages such as American Sign Language, French Sign Language, British Sign Language and others are fully independent languages. But natural signed languages are only one way of conveying language in the visual/gestural modality. Signed languages also have mechanisms for representing the material of oral languages. Fingerspelling is one example of such a representational system. This book examines fingerspelling from a phonetic perspective. Several studies of the kinematics of fingerspelling articulators are reported. From these detailed analyses of articulator timings and velocities, conclusions are drawn which suggest that, like speech, fingerspelling may be explained in terms of coordinative structures and task dynamics. The thrust of the book is to explore the notion that signed and spoken languages can be compared not only as abstract linguistic systems but also at the physical level as dynamically structured articulations. An implication of these studies is that a common basis in gesture can be found for the production, perception, and neural organization of signed and spoken languages.

The Phonetics of Fingerspelling

The Phonetics of Fingerspelling

The Segment in Phonetics and Phonology

Authors: Eric Raimy
Categories: Language Arts & Disciplines
The Segment in Phonetics and Phonology unravels exactly whatthe segment is and on what levels it exists, approaching the studyof the segment with theoretical, e

The Oxford History of Phonology

Authors: B. Elan Dresher
Categories: Language Arts & Disciplines
This volume is the first to provide an up-to-date and comprehensive history of phonology from the earliest known examples of phonological thinking, through the

Advances in the Sign Language Development of Deaf Children

Authors: Brenda Schick
Categories: Language Arts & Disciplines
The use of sign language has a long history. Indeed, humans' first languages may have been expressed through sign. Sign languages have been found around the wor

The SAGE Encyclopedia of Human Communication Sciences and Disorders

Advances in the Sign Language Development of Deaf Children