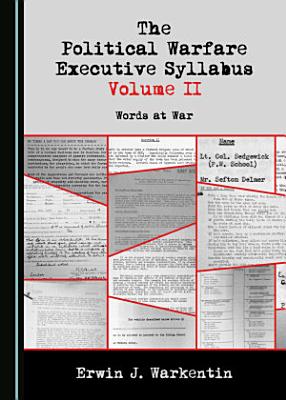 “Time bombs,” “Trojan Horses” and “Dithering Hamlets” were all part of the everyday jargon of the World War II’s ultra-Secretive Political Warfare Executive (PWE). The PWE’s instructors used these terms in the training of the next generation of propagandists and political warriors. The Political Warfare Executive Syllabus reveals for the first time what it took to become a propagandist in what was then the most elite psychological warfare unit in the world. Under the maxim that a good propagandist is trained not born, the lecturers of the PWE Training School at Woburn Abbey and then Brondesbury systematically explored every aspect of how to deliver a lethal dose of propaganda to the enemy and then a purgative and curative dose in the peace that followed. The views of the PWE’s instructors were controversial. This is significant because they would play an important, if hidden, role in how Europe is developing even today. For example, they held a low opinion of the French in general and considered that they had been reduced to the level of “dithering Hamlets” by the German “Trojan Horses” even before the first German tank had crossed the Belgian frontier. On the dark side of PWE operations, they were not above killing the prostitutes whose brothels served the German U-Boot fleet in order to amplify their propaganda message. Perhaps most significant is that they saw Great Britain as European and espoused a Europe that looks very much like the European Union of the early 21st Century. However, there is one important difference. They saw this Greater Europe as accepting the British way of life and being led by Great Britain and not embracing American culture under German leadership. This first volume introduces the reader to the history and theory of political warfare as seen through the eyes of the inheritors of Lord Northcliffe’s Crewe House. Drawing on J. F. C. Fuller and his concept of a war fought in the mind without armies, it establishes the theoretical parameters of political warfare.

Authors:
Categories: World War, 1939-1945
In the early years of World War II prospective agents for the Special Operations Executive were trained in the black arts of camouflage, sabotage and subterfuge

Authors: Tim Brooks
Categories: History
This book examines the important issue of British propaganda to France during the Second World War and aims to show the value of the propaganda campaign to the

Index to the Correspondence of the Foreign Office for the Year

The Calendar of the London School of Economics and Political Science (University of London).