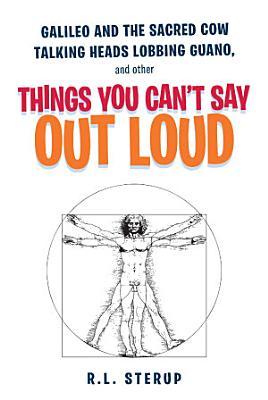 Things You Can't Say Out Loud is a collection of humorous essays touching upon a wide variety of interesting and timely topics, including what the hell is wrong with Florida. And also France. Ha ha. Those places are great, as too are talking heads lobbing guano at one another on cable news. As illustrated by a worried world frantically fretting over dramatic decline in civilized discourse--and accompanying end to governance and plumbing--as shown most recently by Wolf Blitzer sucker punching Tucker Carlson behind the buffet table at the White House Correspondents' Association dinner. A brouhaha that ended with every Democratic presidential hopeful holding a handful of hair from the head of at least one Fox News anchor. Not to worry; however, given that crass divisiveness and coarse discourse bear a direct relationship to the unimportance of the subject under discussion, an important discovery to be known henceforth as the principle of reverse hyperbole. Laughs aplenty from these and other such wry observations are promised in this page-turning volume, albeit one that comes with a warning against consumption of contents while driving on the I-95, lest the driver spit Diet Coke through her nose from cackling outburst while trying to pass a tank truck. Safety first. Except in most of Florida. And France.