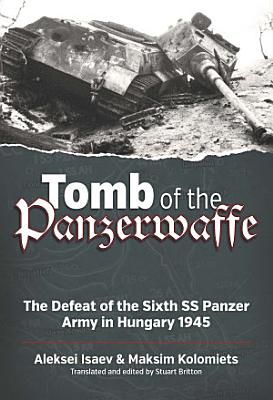 In March 1945 the German Wehrmacht undertook its final attempt to change the course of the war by launching a counteroffensive in the area of Lake Balaton, Hungary. Here, the best panzer forces of the Third Reich and the elite of the Panzerwaffe were assembled - the panzer divisions SS Leibstandarte Adolf Hitler, Das Reich, Totenkopf, Wiking and others, staffed by ardent believers in Nazism and armed with the most up-to-date combat equipment, including up to 900 tanks and self-propelled guns. At the time, this was considered a secondary axis for the Red Army, and thus the troops of the 3rd Ukrainian Front had to stop the German counteroffensive with their own forces and could not count upon reinforcements from the Stavka Reserve, which were needed for the decisive storming of Berlin. Relying upon their combat skill and rich combat experience, the Soviet troops carried out this task with honor, stopping the tidal wave of German armor and inflicting a decisive defeat and enormous, irreplaceable losses upon the enemy. The defeat of the Sixth SS Panzer Army became a genuine catastrophe for Germany, and Balaton became the tomb of the Panzerwaffe. In this book, penned by two leading Russian military historians, this major defeat suffered by the Wehrmacht has been described and analyzed for the first time using data from both Soviet and German archives. It focuses not only on Operation Spring Awakening, but also describes the preceding Konrad offensives conducted by the Germans in the effort to come to the aid of the encircled and desperate German and fascist Hungarian defenders of Budapest. This edition is lavishly illustrated with over a hundred rare photographs of destroyed or disabled German armor taken shortly after the battle by a Soviet inspection team, besides other photographs and specially commissioned color maps.

Tomb of the Panzerwaffe

Authors: Aleksei Isaev
Categories: History
In March 1945 the German Wehrmacht undertook its final attempt to change the course of the war by launching a counteroffensive in the area of Lake Balaton, Hung

From the Realm of a Dying Sun

Authors: Douglas E. Nash
Categories: History
An “excellent and thought provoking” chronicle of the IV. SS-Panzerkorps in Hungary and Austria in the last months of World War II, with maps (Globe at War)

Authors: Steven Zaloga
Categories: History
Armor expert Zaloga enters the battle over the best tanks of World War II with this heavy-caliber blast of a book armed with more than forty years of research.

Authors: John S. Harrel
Categories: History
While the development of tanks had largely led to the replacement of cavalry in most armies by 1939, the Soviets retained a strong mounted arm. In the terrain a

Red Army into the Reich

Authors: Simon Forty
Categories: History
A detailed narrative of how the Red Army pushed west and into Berlin in 1945. The last year of the war saw Russian offensives that cleared the Germans out of th