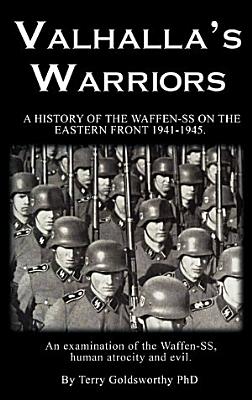 They were the soldiers sworn by an oath of loyalty to follow Hitler into a maelstrom of genocidal barbarity. They were the elite of the German military in World War Two. They were the Waffen-SS. On June 22, 1941, before dawn, German troops invaded Russia. The Barbarossa campaign included some of the greatest episodes in military history: it also allowed Hitler s ideological warriors, the Waffen-SS, to give full vent to their ideological way of war. It provided the killing ground in which some of the worst atrocities seen by humanity were committed. In Valhalla s Warriors, author Dr. Terry Goldsworthy, meticulously chronicles what has become one of the most famous fighting elites in World War Two. Discovering the truths behind the legend by drawing on hundreds of sources - including first hand accounts of Waffen-SS veterans - and spanning five years of research Dr. Goldsworthy leads the reader through the events that occurred on the Eastern Front, both on the front lines and behind. This book is an exploration of the Waffen-SS, and by necessity of evil. The Waffen-SS are commonly regarded as the elite of Germany's armed forces during World War II. They gained much of this reputation whilst fighting on the Eastern Front in Russia. Germany's war against the Soviet Union in World War II, in particular the role of the Waffen-SS forms much of the subject matter of this book. The death and destruction during this conflict would result not just from military operations, but also from the systematic killing and abuse that the Waffen-SS directed against Jews, Communists and ordinary citizens. This book provides a clear, concise history of the Waffen-SS campaign of conquest and genocide in Russia by looking at the actions both on and behind the front lines. By drawing on the best of military and Holocaust scholarship, this book dispels the myths that have distorted the role of the Waffen-SS, in both the military operations themselves and the unthinkable crimes that were part of them. The conventional wisdom that the Waffen-SS in World War II fought a relatively clean fight, unsullied by the atrocities committed by the Nazis, is challenged-and largely demolished. Focusing on the Eastern Front, the book contends that the Nazi vision of a racial-ideological death struggle against Slavic hordes and their Jewish-Bolshevik commissars resonated with soldiers of the Waffen-SS, steeped in traditional anti-Semitic and racist dogmas. In doing so this book clearly shows that the Waffen-SS was an organisation that committed widespread atrocities, and were truly soldiers of evil. DR. TERRY GOLDSWORTHY is a Detective Senior Sergeant with over 25 years policing experience in Australia. He has served in general duties, watchhouse and traffic branch before moving to the Criminal Investigation Branch in 1994. Dr. Goldsworthy has completed a Bachelor of Commerce, Bachelor of Laws, Advanced Diploma of Investigative Practice and a Diploma of Policing. As a result of his law studies Dr. Goldsworthy was admitted to the bar in the Queensland and Federal Courts a a barrister in 1999. Dr. Goldsworthy then completed a Master of Criminology at Bond University. He later completed his PhD focusing on the concept of evil and its relevance from a criminological and sociological viewpoint. In particular Dr. Goldsworthy looked at the link between evil and armed conflicts using the Waffen-SS as a case study. He has also contributed chapters to the tertiary textbooks Forensic Criminology and Serial Crime, published by Academic Press. He has also written a chapter to the general crime book Crime on My Mind published by New Holland Publishing."

Authors: Terry Goldsworthy
Categories: History
They were the soldiers sworn by an oath of loyalty to follow Hitler into a maelstrom of genocidal barbarity. They were the elite of the German military in World

Authors: Tom Hill
Categories: Fiction
A thousand years ago a slave girl becomes a Viking warrior and swordsmith. Raiding far Castille in dragon ships with her Norse Swordsmith master and friends. A

Authors: Richard Gable
Categories: Fiction
Var-Tog, Kryton, Sondergaard, and Aldora, knights newly graduated from the Dragon's Gauntlet, have found themselves on quest within days after their graduation.

Authors: W.D. Valgardson
Categories: Fiction
Ever since the accident, ex-cop Tom Parsons’s life has been crumbling around him: his marriage and career have fallen apart, his grown children barely speak t

Authors: Craig Shirley
Categories: History
Chronicles the decisive month in American history, where the Japanese attack on Pearl Harbor facilitated the entrance of the United States into World War II, an

The Teutonic Mythology of Richard Wagner's "The Ring of the Nibelung": The natural and supernatural worlds