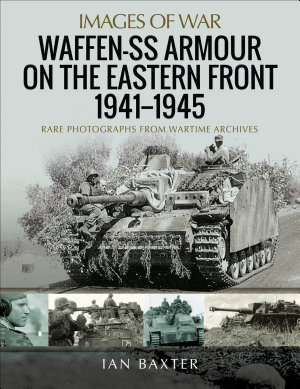 Hitler’s invasion of the Soviet Union, codename Operation Barbarossa, was arguably the pivotal moment of the Second World War. Initially the onslaught was staggeringly successful with, as the superb contemporary images in this book show, Waffen- SS armored divisions leading the charge. But the Nazis had underestimated the Russians’ determination to defend their homeland and the logistical problems compounded by the extreme winter weather conditions. After early victories such as the recapture of Kharkov in early 1943 and the Kursk offensive, commanders and crews of armored vehicles such as Pz.Kpfw.I, II, III, IV, Panther, Tiger, King Tiger, assault and self-propelled guns had to adapt their tactics and equipment to what became a desperate defensive withdrawal eventually back across a scarred and devastated Eastern Front. Even during the last months of the war as the Panzers withdrew through Poland and into the Reich, these exhausted elite units, broken down into small battle groups or Kampfgruppen, fought to the bitter end. With authoritative text supported by a plethora of rare fully captioned photographs, this classic Images of War book informs and inspires the reader revealing the key role played by Waffen-SS Panzer units in this most bitter campaign.

Authors: Ian Baxter
Categories: History
“An incredible up close and personal look . . . [at] the men, machines and operational history of the Waffen-SS.”—MSC Review Connect This book in the popu

Authors: Anthony Tucker-Jones
Categories: History
Stalin's purge of army officers in the late 1930s and disputes about tank tactics meant that Soviet armored forces were in disarray when Hitler invaded in 1941.

Authors: Terry Goldsworthy
Categories: History
They were the soldiers sworn by an oath of loyalty to follow Hitler into a maelstrom of genocidal barbarity. They were the elite of the German military in World

Authors: Pierre Tiquet
Categories: History
Includes coverage of all the tank destroyers used by the German army including the Hornisse,the Jagdpanzer 38, the Jagdpanzer IV, and the Elefant. From the earl

War on the Eastern Front

Authors: James Lucas
Categories: History
Dawn on Sunday 22 June 1941 saw the opening onslaughts of Operation Barbarossa as German forces stormed forward into the Soviet Union. Few of them were to survi

Authors: Steven H. Newton
Categories: History
The battle of Kursk, fought in the summer of 1943, involved six thousand German and Soviet armored vehicles, making it the biggest tank battle of all time and p

Authors: Michael Olive
Categories: History
Photo chronicle of the German-Soviet campaign on the Eastern Front during its first brutal winter after Operation Barbarossa ground to a halt outside Moscow Hun